From late 1966 though late 1967, the small town of Point Pleasant, West Virginia, along the Ohio River, was terrorized by a series of sightings of an uncanny creature known as Mothman. He was typically described as a broad-shouldered black or gray humanoid at least seven feet in height with moth-like wings that extended about ten feet. His glowing red eyes seemed to have a hypnotic effect. Sometimes the creature appeared headless, with his round, reflective eyes set down in his shoulders.

The eerie entity would reportedly swoop down on people or cars and chase them at very high speeds. Sometimes it would suddenly shoot straight up in the air and completely disappear…

Were all these sightings of Mothman and other anomalous incidents just a weird precursor to the brief psychedelic era in popular culture when hallucinations became the norm? Or are there precedents for this phenomenon in the distant past?

Cut to the high plain of central New Mexico in about the middle of the 14th century. On the western bank of a turbulent, muddy river, we see a flat-topped pyramid where a bizarre ritual is taking place. It involves a ring of elders wearing feathered headdresses, geometric medallions, white sashes, and brightly painted capes. Some are holding round shields and eagle-talon staffs.

At the center stands a tall being with the gray wings and coiled proboscis of the night flying hawk moth. One of the elders raises a woven plaque heaped with tiny yellow and black seeds and brown spiny pods. The participants begin to eat the seeds, while low chants punctuated by a lone cottonwood drum rise into the endless desert night. 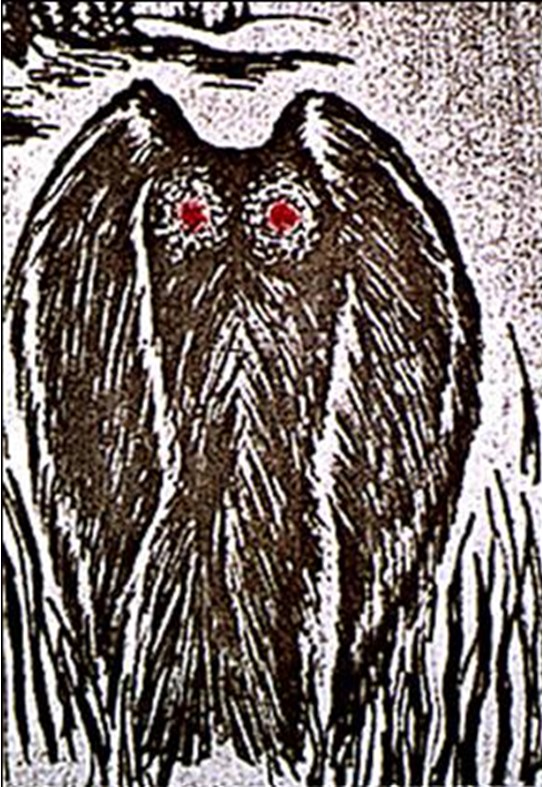 Artist’s sketch of one variation of Mothman

Located about 12 miles southwest of the modern town of Los Lunas is the ancient village where this ritual took place. Archaeologists know it as Pottery Mound, named for the profusion of polychrome potsherds . . .

The most spectacular feature of Pottery Mound, however, is not either the pyramid or the pottery. Instead, we find the walls of every kiva covered with lavishly painted murals depicting a variety of social and spiritual motifs.

Some of the most unusual murals, however, are those that depict what we call today the Mothman. One shows the creature with a red body, white sash, black kilt with geometric designs, and a red headdress. His translucent wings are crosshatched and painted with a few lavender spots. One wing’s lower edge has three red spots on a white and jagged background.

What prompted the depiction of this strange insect-human hybrid? One of the archaeological interns who originally excavated Pottery Mound put forth an intriguing theory. “There exists a mutualistic relationship in nature between the hawk moth and the Datura plant. ALL of this is related to the widespread ritualistic use of Datura during SHAMANISTIC practices…”

Datura wrightii is known as devil’s weed and is a nocturnally blooming plant, with white trumpet-shaped flowers that are pollinated by the hummingbird-sized hawk moth, which inserts its long proboscis into the fragrant flower tube to reach the profuse nectar. 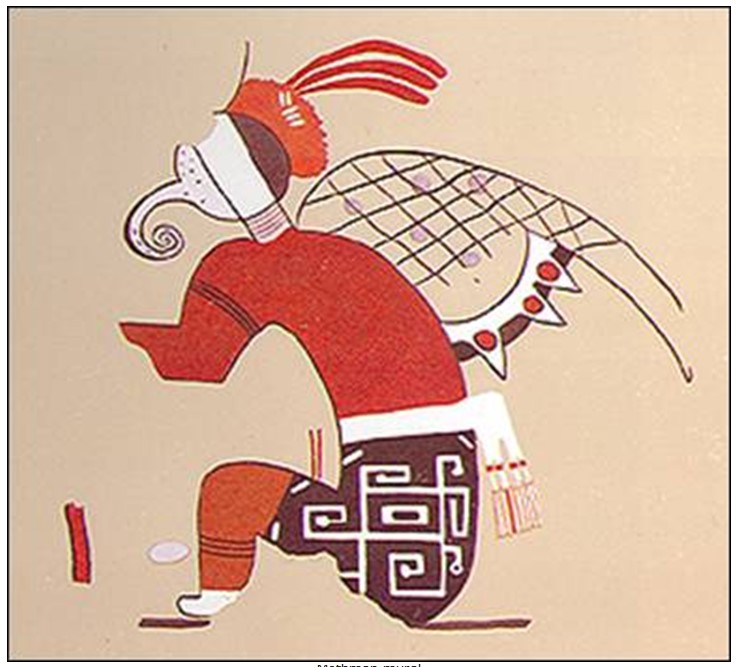 Datura is a powerful and dangerous hallucinogen. It has been used both medicinally and ritually for at least 4,000 years in the American Southwest. The Navajo have a folk adage regarding this poisonous tropane alkaloid of the nightshade family: “Eat a little, and go to sleep. Eat some more, and have a dream. Eat some more, and don’t wake up.”

Andrew Weil highlights the negative aspects of the plant: “Datura is not a nice drug. Although sometimes classified as a hallucinogen, it should not be confused with the psychedelics. It is much more toxic than the psychedelics and tends to produce delirium and disorientation. Moreover, Datura keeps bad company. All over the world it is a drug of poisoners, criminals, and black magicians.”

For the indigenous people of the Andes in Peru, Datura is known as yerba de huaca, or ‘herb of the graves’. This is because its use allowed communication with the spirits of ancestors.

Extracts or derivatives of Datura mixed with the fat of a wild boar are sometimes used in a paste known as a “flying ointment.” 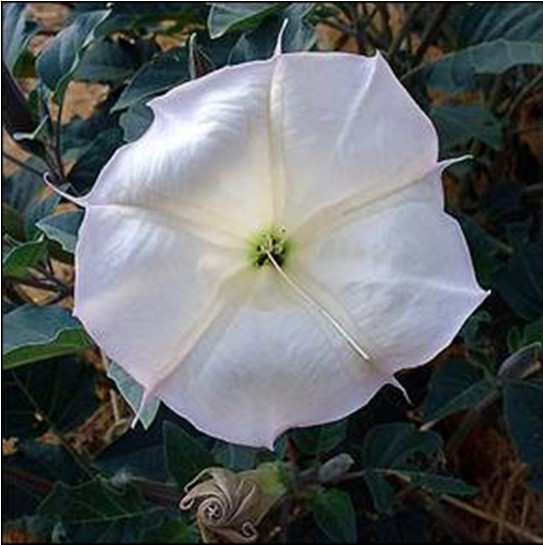 Anthropologist and author Carlos Castaneda, during his tutelage with the Yaqui shaman and diablero don Juan Matus, recounts his teacher’s intimate knowledge of Datura to accomplish psychic flight:

“The second portion of the devil’s weed [the root] is used to fly… The unguent by itself is not enough. My benefactor said that it is the root that gives direction and wisdom, and it is the cause of flying. As you learn more, and take it often in order to fly, you will begin to see everything with great clarity. You can soar through the air for hundreds of miles to see what is happening at any place you want, or to deliver a fatal blow to your enemies far away. As you become familiar with the devil’s weed, she will teach you how to do such things.”

In this case the plant itself is referred to as a feminine ally who is actually conscious. Castaneda asks whether his own body actually flew like a bird, and don Juan replies:

“A man flies with the help of the second portion of the devil’s weed. That is all I can tell you. What you want to know makes no sense. Birds fly like birds and a man who has taken the devil’s weed flies as such [el enyerbado vuela así].”

“No, he flies as a man who has taken the weed [No, así como los enyerbados].” 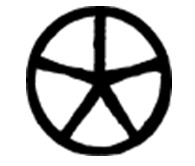 Egyptian hieroglyph for ‘star’. Various species of Datura grow in Egypt. Is the morphology of the night-blooming “moonflower” the source for this hieroglyph? Duat, the Egyptian word meaning ‘underworld’, was also spelled Dat, the root of the word Datura

Members of Hopi Fire Clan (Ko’kop) were also known as ‘the redheads’. As the most aggressive Hopi clan, it founded the Warrior Society named Motswimi. The Fire Clan is furthermore associated with an ominous being named Masau’u, the Hopi god of death, war, and the underworld. Interesting in this context is the Hopi word for ‘moth’: masivi. This word has the same root as the name of the Hopi death god, which literally means ‘gray’-the color of moth wings.

One Hopi synonym for ‘moth’ is even more intriguing: Tsimonmana specifically refers to “a type of moth attracted to jimsonweed.” This word literally means ‘jimsonweed maiden’, thereby echoing the feminine designation of Datura that we find in Yaqui culture. Some Hopi legends do indeed describe pairs of licentious young femme fatales who wear Datura blossoms in their hair while they seduce and harm unsuspecting males. We thus have the moth and jimsonweed contained in the single Hopi word, Tsimonmana.

One Zuni legend describes a girl and boy who dwell in the underworld but suddenly find a trail that leads to the bright earth plane. On their heads they wear garlands of Datura blossoms, which allow them to put people to sleep and or make people see ghosts. This sorcery alarms the gods, so the children are sent back to the dark realm. The beautiful but deadly white flowers remain, however, and are soon spread far and wide across the desert.

The Zuni are culturally related to the Hopi, so it is interesting that the Hopi puvuwi is another word that means ‘moth’ but has an alternative meaning of “someone who sleeps all the time.”

Other peculiar creatures depicted at Pottery Mound seem to resemble those far to the south. Fortean researcher John A. Keel in his book The Mothman Prophecies, which ignited the initial frenzy surrounding the modern Mothman sightings. He specifically refers to Mexican tales of black flying entities called ikals that live deep in caverns like bats. (vampires) The Mayan word ik means ‘air’ or ‘wind’ and ikal means ‘spirit’, while ek means ‘black’.

These hairy humanoids are on the average of three feet tall, and they have human hands but horse hooves on their feet. They are mostly nocturnal, and spheres of light sometimes accompany them. The Tzeltal Maya of Chiapas try to fight off these ugly creatures with machetes when they fly down and attack them. They can paralyze humans and are known to kidnap and attack women.

Perhaps this potent psychoactive plant merely opens a dark doorway through which the inter-dimensional Mothman flies toward the light. Whatever the reality, this wingéd wraith has taken hold of our modern imagination just as surely as it must have moved those pueblo people at Pottery Mound so long ago.

Excerpt from: The Kivas of Heaven: Ancient Hopi Starlore by Gary A. David (2010)

Q1 – Were the Inorganic Entities of the Toltecs, a direct connection to Datura and adventures into the Underworld?

Q2 – Were the beasts/monsters that the Naguals used to train Carlos, from the Underworld?

Q3 – Is this why Anastasia states that the Toltec path is no longer valid?

Upon further contemplation, there is no doubt that many of the teachings are invaluable, and yet it may allow a learner to disengage from trying to mimic every teaching and experience, as the methods are no longer available nor applicable.